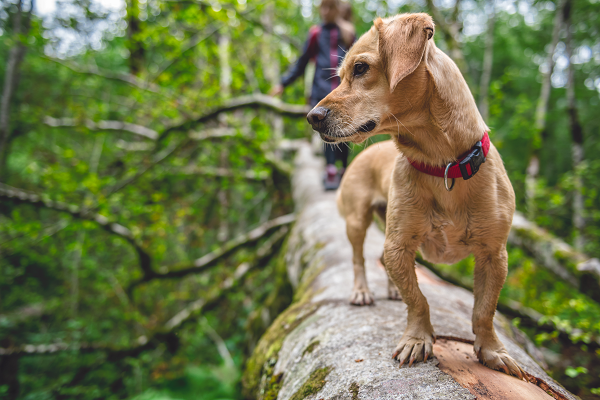 What is Lyme disease?

Lyme disease is caused by the spirochete (type of bacterium), Borrelia burgdorferi. It is transmitted to dogs through the bite of an infected tick. Once in the bloodstream, the Lyme disease organism is carried to many parts of the body and is likely to localize in joints or kidneys. The most common type of tick to carry Lyme disease is the deer tick, also known as the black-legged tick. Deer ticks are distributed through the midwest and the eastern United States, as well as throughout Canada with the highest proportion in Ontario.

Yes, but people do not get it directly from dogs. They get it from being bitten by the same ticks that transmit it to dogs. Therefore, preventing exposure to ticks is important for you and your dog.

What are the clinical signs of Lyme disease in dogs?

Many dogs affected with Lyme disease are taken to a veterinarian because they seem to be experiencing generalized pain and have stopped eating. Affected dogs have been described as if they were walking on eggshells. Often, these pets have high fevers. Dogs may also begin limping. This painful lameness often appears suddenly and may shift from one leg to another and if left untreated, may eventually disappear, only to recur weeks or months later.

Non-specific signs which may indicate that Lyme disease is affecting the kidneys include vomiting, lethargy, anorexia (lack of appetite), and weight loss. The kidney form of the disease is less common but often fatal.

Most dogs infected with the Lyme disease organism take two to five months before they show symptoms. By this time, the disease may be widespread throughout the body.

"Most dogs infected with the Lyme disease organism take two to five months before they show symptoms. By this time, the disease may be widespread throughout the body."

How is Lyme disease diagnosed?

Dogs with lameness, swollen joints, and fever are suspected of having Lyme disease. However, other diseases may also cause these symptoms. There are a few blood tests that may be used for confirmation. The first is an antibody test that your veterinarian can perform in the clinic using a special test kit. This test detects the presence of antibodies created by exposure to the organism. A test can be falsely negative if the dog is infected, but has not yet formed antibodies, or if it never forms enough antibodies to cause a positive reaction. It is recommended to test no earlier than four weeks after a tick bite. Some dogs that have been infected for long periods of time may no longer have enough antibodies present to be detected by the test. Therefore, a positive test is meaningful, but a negative is not. A follow-up test, called a QC6 test, can be done to assess the numerical antibody level as confirmation.

"It is recommended to test no earlier than four weeks after a tick bite."

Other tests including PCR (polymerase chain reaction), ELISA (enzyme-linked immunosorbent assay), joint fluid analysis, and culture can also be done with varying degrees of sensitivity but are less often performed. General blood and urine tests are also often done to assess kidney function and look for loss of protein in the urine. See handout “Testing for Lyme Disease in Dogs” for further information.

How is Lyme disease treated?

Because the Lyme spirochete is a bacterium, it can be treated with antibiotics. The antibiotic of choice is doxycycline (Doxirobe®, Vibramycin®), followed by amoxicillin (Amoxi-Tabs®, Amoxi-Drop®, Biomox®), then azithromycin (Zithromax®). Treatment lasts for four weeks. Occasionally, the initial infection will recur, or the pet will become re-infected by being bitten by another infected tick.

How can I prevent my dog from getting Lyme disease? 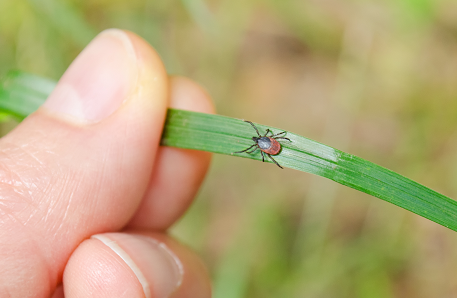 The key to prevention is limiting your dog’s exposure to ticks. Ticks are found in grassy, wooded, and sandy areas. They find their way onto an animal by climbing to the top of a leaf, blade of grass, or short trees (especially cedar trees), where they wait until their sensors detect an approaching animal on which to crawl or drop. Keeping animals from thick underbrush reduces their exposure to ticks. Dogs should be kept on trails when walking near wooded or tall grass areas.

There are also several products available that can kill these ticks and prevent disease transmission. Some products are available over the counter, while others are only available through your veterinarian. There are effective monthly preventatives that are typically applied to the skin at the back of the neck and represent a convenient method of control for these external parasites. This includes Frontline Plus® (only available in the USA) and Advantix®. In recent years, the topical Bravecto® has been developed and lasts for three months when applied topically. Additionally, there are chewable products such as Nexgard® and Simparica® that are given monthly or chewable Bravecto®, which is given every three months. Your veterinarian can advise you as to the best parasite control options for your dog.

How do I remove a tick from my dog? 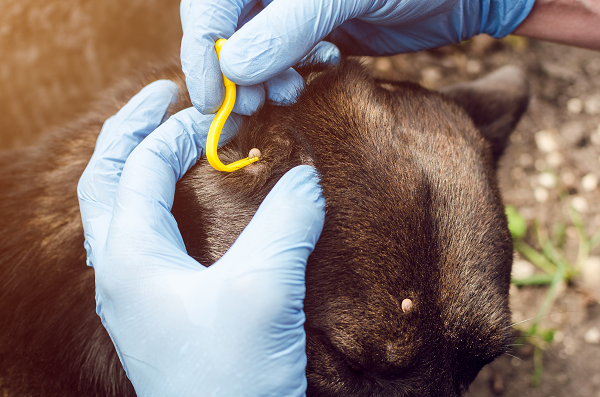 Check your pet immediately after it has been in a potentially tick-infected area. The deer tick is only about the size of a pinhead in its juvenile stage but is a little more obvious in the adult phase, especially after feeding. If you find a tick moving on your pet, the tick has not fed yet. Remove the tick promptly and place it in rubbing alcohol or crush it between two solid surfaces. If you find a tick attached to your pet, grasp the tick with fine tweezers or your fingernails near the dog's skin and firmly pull it straight out. There are also tools available (Tick Twister® or Tick Key®) that can be useful. However, take care to use them cautiously as twisting or jerking the tick may cause the mouthparts to break off and remain in the skin. See your veterinarian if you are unsure or unable to remove the tick from your dog.

"...twisting or jerking the tick may cause the mouthparts to break off and remain in the skin."

Make sure you protect your fingers from exposure by using a tissue or a disposable glove. You may need another person to help restrain your dog. Removing the tick quickly is important since the disease does not appear to be transmitted until the tick has fed for approximately 12-24 hours. If you crush the tick, do not get the tick's contents, including blood, on your skin. The bacterium that causes Lyme disease can pass through a wound or cut in your skin.

© Copyright 2022 LifeLearn Inc. Used and/or modified with permission under license.