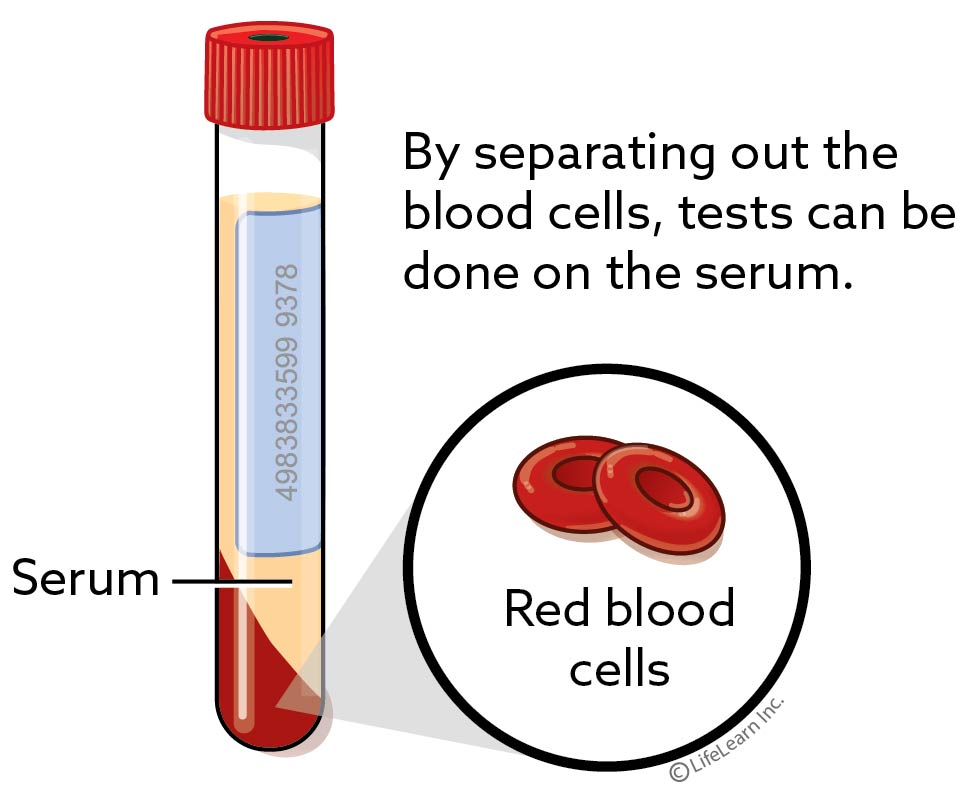 Serum is collected by placing a tube of clotted blood in a machine called a centrifuge, which spins the blood very quickly in a small circle, forcing the cells to the bottom of the tube and allowing the serum to sit on top. The serum is then lifted off the top and placed in a fresh tube for testing.

What is serum biochemistry?

Serum biochemistry refers to the chemical analysis of serum. There are many substances in serum, including proteins, enzymes, lipids, hormones, etc. Testing for these various substances provides information about the organs and tissues in the body as well as the metabolic state of the animal. If a test result is abnormal, it may indicate that disease is present. Further assessment of the test results may offer clues about which organ system is affected and also the nature and severity of the disorder.

What is a biochemistry profile?

There are too many substances in serum to consider testing all of them each time a pet gets sick, so tests for the various substances are arranged into smaller groups, called serum biochemistry panels or profiles. Each panel or profile is a selected group of biochemistry tests designed to investigate a specific interest or concern.

What types of biochemistry tests would be included in a general health profile?

Proteins (total protein, albumin, globulin). The two main types of protein found in blood are called albumin and globulin. These proteins can be measured individually, or combined into a single test called total protein, which measures all protein in the sample. Albumin levels can indicate if a pet is dehydrated, and can provide information about the function of the liver, kidneys, and digestive system. Globulin levels reflect underlying inflammation and/or antibody production. Increased levels of globulins are often associated with infectious diseases, immune-mediated disease, and some types of cancer.

Liver Enzymes (ALT, ALP). There are many different liver enzymes, but the two that appear in most profiles are alanine aminotransferase (ALT), and alkaline phosphatase (ALP). The first enzyme is typically found when the cells of the liver are stressed or damaged. The second enzyme is generally increased when bile flow in the liver is reduced.

Bilirubin is a pigment produced primarily in the liver that is associated with the breakdown of hemoglobin from red blood cells. Bilirubin is stored in the gall bladder as a component of bile. Increases in bilirubin are associated with increased red cell destruction or decreased bile flow through the liver.

Kidney Tests (urea, creatinine). The two substances most commonly measured to assess kidney function are urea (also called blood urea nitrogen or BUN) and creatinine. Urea is a by-product of protein breakdown; it is produced in the liver and excreted from the body by the kidney. Increases in BUN may indicate dehydration, gastrointestinal bleeding, cardiac disease, or primary kidney disease. Decreases in BUN are associated with over hydration, liver failure, or reduced protein intake in the diet. Creatinine is a by-product of muscle metabolism and it is excreted entirely by the kidney. Increased levels of creatinine indicate decreased kidney function. 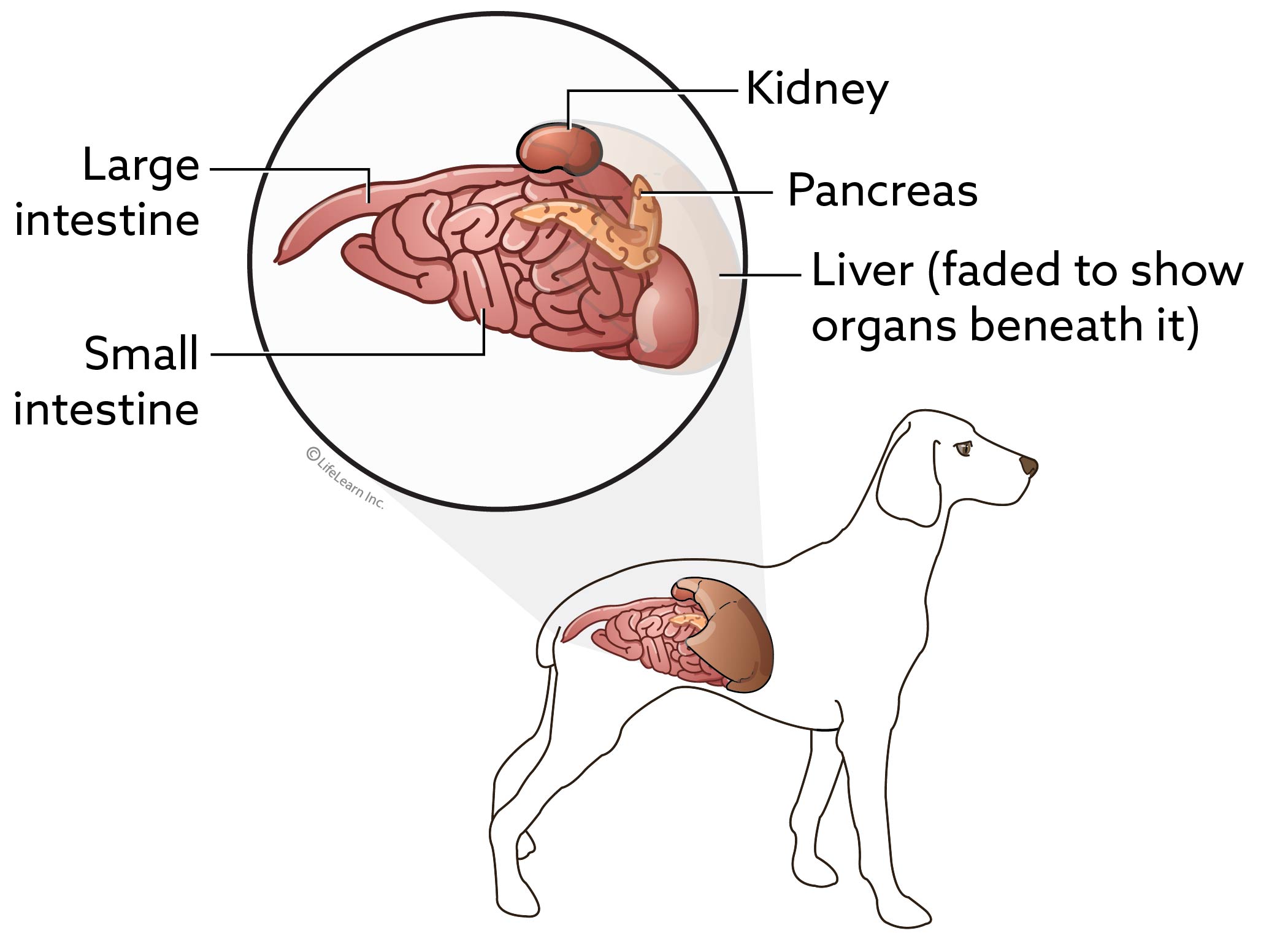 Pancreatic Enzymes (amylase, lipase, pancreatic lipase immunoreactivity). Two commonly measured pancreatic enzymes are amylase and lipase. Increases in these enzymes may occur when the pancreas is inflamed, although they can also be elevated with kidney or intestinal disease, and when certain drugs are used. They are not very reliable indicators of pancreatitis. A newer test for pancreatic inflammation called pancreatic lipase immunoreactivity (PLI) is more reliable because it rises only with pancreatic inflammation (see handouts "Pancreatitis in Cats - Pancreas-Specific Lipase" and "Pancreatitis in Dogs - Pancreas-Specific Lipase"). Certain laboratories run variations of this test called spec cPL, fPL or PSL.

Calcium and Phosphorus. These minerals are present in tiny amounts in blood and changes, either up or down, may be associated with a variety of diseases or conditions. For example, persistently high calcium levels may indicate the presence of kidney disease, cancer, or disease of the parathyroid glands, while low calcium levels may be due to pancreatitis, antifreeze poisoning, or disease of the parathyroid gland. High phosphorus levels are associated with kidney failure and some nutritional problems. Low phosphorous level can occur with dietary problems, gastrointestinal disease, and kidney disease etc.

Cholesterol is produced in the liver as part of fat metabolism. Increases in cholesterol are associated with hormonal and metabolic diseases, liver disease, and serious kidney disease.

Electrolytes. The most important electrolytes are potassium, chloride, sodium, and bicarbonate. These substances are present in blood in small quantities, and each electrolyte has a different role to play in the body. Collectively, electrolytes help to maintain blood and tissue fluids in balanced state. Disturbances in electrolytes are often caused by vomiting, diarrhea, and kidney disease, and accompany many serious metabolic disorders.