What is a complete blood count?

The complete blood count, commonly called a CBC is a routine blood test that is used in all stages of health and illness. It is a simple test that gives information about the different cell types in the blood and can indicate the presence of many forms of disease. Most of the blood cells come from bone marrow, so the CBC can also be used indirectly to assess the health of the bone marrow (see handout ”Bone Marrow Collection and Examination").

How is a CBC performed?

A small sample of blood is collected into a special tube that prevents the blood from clotting. The sample is then put in a machine called an automated blood analyzer, which counts the different cell types and describes various characteristics of the cells. In addition, a drop of blood is spread thinly on a glass slide creating a blood smear. This is stained with special dyes, and examined under the microscope to look at the appearance of individual cells. 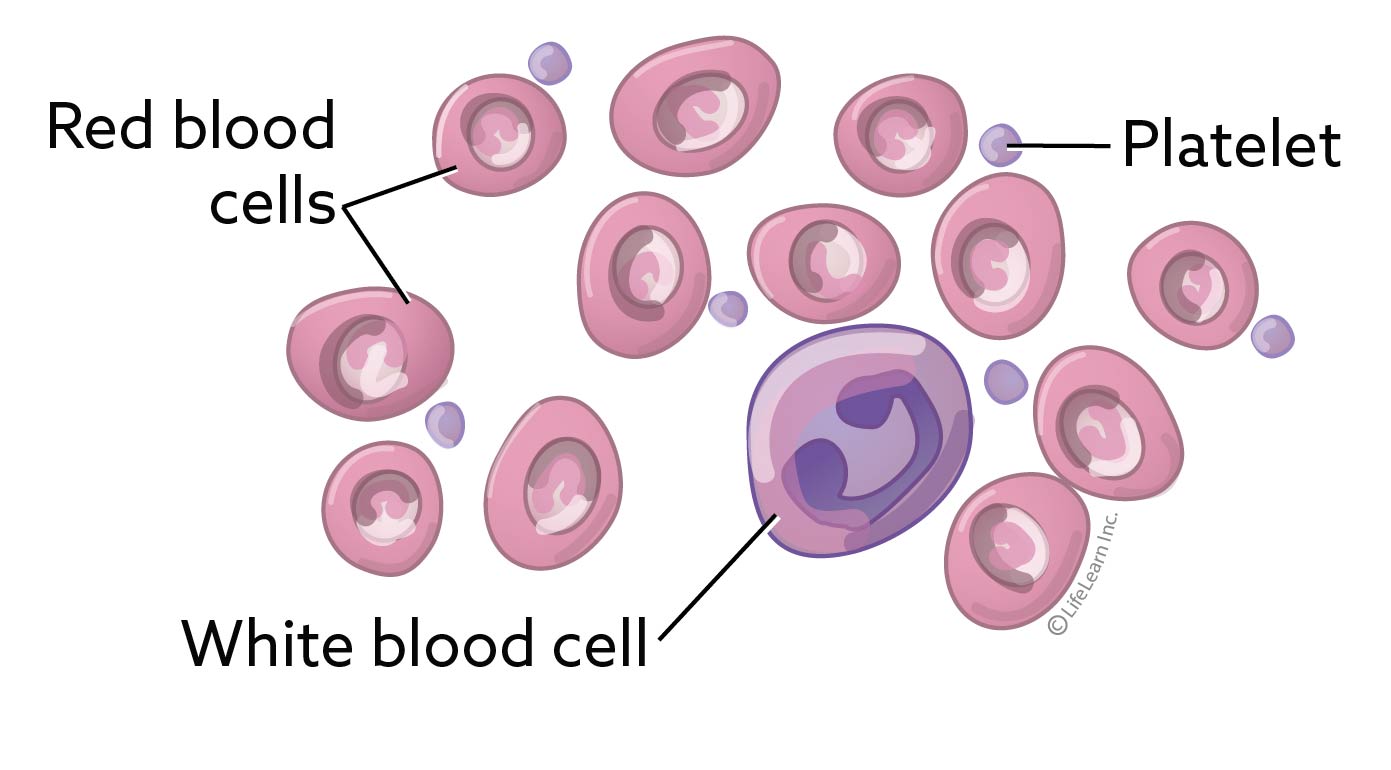 What does a CBC measure?

What are red blood cells and why are they important?

Red blood cells are the most numerous cells in blood by far, and give blood its red color. They are responsible for carrying oxygen from the lungs to the tissues of the body. They can do this because of a special protein called hemoglobin that is found in each red blood cell. As blood is pumped through the lungs, oxygen moves into the red cells and binds tightly to hemoglobin. When the blood is pumped out through the body and into the tissues, oxygen is released from hemoglobin, leaves the red blood cells, and enters the cells of the tissues.

What does the CBC tell us about red blood cells?

A) Numbers. The CBC reports three different red cell measurements: red blood cell count (RBC), hematocrit (HCT) and hemoglobin (HGB). These measurements provide information about how many red cells are present and how much hemoglobin is available. A decrease in either the red cell count or the amount of hemoglobin is called anemia. There are many causes for anemia, and although the CBC may provide clues, further investigation is almost always required to reach a diagnosis. By comparison, a mild increase in the number of red cells is relatively common and usually indicates that the pet is dehydrated or excited. This change is usually temporary and is not worrisome. In very rare cases a persistently high red blood cell count can signal a bone marrow disorder.

B) Size. The size of the red blood cells sometimes provides clues about a disease. For example, larger red cells can be seen with vitamin deficiency and bone marrow disease etc. Smaller red blood cells can be found with iron deficiency and immune system problems. Sometimes the red cells are normal size, but there just are not enough of them. This suggests longstanding illness such as ongoing kidney disease, persistent inflammation, or cancer.

C) Color and shape. The color and shape of the red blood cells are additional details that help in the diagnosis of disease. For example, an erythrocyte with a bluish tinge is called a polychromatophilic erythrocyte (often shortened to polychrome); it is a young red cell newly released from the bone marrow and it is slightly larger and bluer than older red cells. In an anemic animal, finding polychromes in the blood is a good sign because it signals that the bone marrow is responding to the anemia by working hard to produce new red blood cells. Sometimes a special dye is used to count polychromes, and the number is reported as a reticulocyte count. This provides the same information as counting polychromes, but it is more accurate.

There are many red cell shape changes that have been associated with various diseases. The changes are rarely diagnostic by themselves, but they can provide clues to the nature of the underlying disease.

What are white blood cells and why are they important?

White blood cells or leukocytes are essential to help protect the body against infectious organisms such as bacteria and viruses, and also against foreign material that may enter the body.

"Think of white blood cells like the "armed forces" of the body."

It may help to think of white blood cells as the "armed forces" of the body. Instead of the army, navy, and air force, the body’s armed forces have five branches represented by different types of white blood cells called neutrophils, lymphocytes, monocytes, eosinophils, and basophils. The different groups of leukocytes work independently and in combination, depending on the problem that is present.

What does the CBC tell us about white blood cells?

A) Numbers. The white blood cell count (WBC) gives an indication of the pet's overall level of protection against infection. Further evaluation determines the number of leukocytes in each of the five branches. The resulting five numbers together are called the differential. Changes in the distribution of leukocytes across the differential can provide information about the type and severity of inflammation, possible causes of the inflammation, and whether the bone marrow is able produce enough white blood cells. Sometimes the white blood cell count is extremely high or extremely low; either of these changes may signal severe infection or indicate serious bone marrow disease, including cancer.

B) Appearance. The appearance of leukocytes can indicate whether the body is overwhelmed by infection or is handling a crisis properly. Leukocyte appearance can indicate the presence of toxins or signal that the immune system has been activated. The presence of bizarre-looking or abnormal cells is often a sign of serious bone marrow disease including cancer.

What are platelets and why are they important?

Platelets or thrombocytes are tiny cell-like structures that are present in large numbers in blood and serve as the first line of defense against bleeding. They are continually on guard to seal microscopic injuries on the inside of blood vessels, and they are the first to respond to minor wounds. For example, when you get a skin scratch or paper cut, or prick your finger with a pin, it is the job of the platelets to stop the bleeding. It is critical to maintain adequate numbers of platelets in the blood.

What does the CBC tell us about platelets?

B) Size. A platelet’s size is generally related to its age; young platelets are large and plump while older platelets are generally smaller. The presence of large, plump, young platelets indicates that the bone marrow is actively producing new platelets. This is an important finding and in a pet with a low platelet count, it is a clue about the underlying disease.

C) Appearance. Very rarely, bizarre-looking abnormal platelets may be found; these are often a sign of serious bone marrow disease including cancer.